Wheat Ridge has become a hotbed of development activity recently, with new housing and commercial projects garnering buzz and attracting headlines. After going years without adding any new inventory to the city’s housing stock, two new housing projects are under construction and another should break ground soon.

The city is also picking up steam when it comes to commercial development. While incentives have helped lured new, unique businesses to the city’s emerging downtown area, known as The Ridge at 38, developers are also aiming to attract larger retailers. A mixed-use development is taking shape at 38th Avenue and Kipling Street that will include a 64-unit senior living facility and a 27,000-square-foot Sprouts store. Another large grocer could land at the southwest corner of 38th and Wadsworth, where Governor John Hickenlooper recently signed a bill that would provide tax credits for environmental clean-up projects. The Wheat Ride Urban Renewal Authority, which owns a portion of that site, could transfer tax credits to a developer to help cover the $300,000 in environmental remediation needed at the site.

The developments have captured the attention of local media outlets, who have been closely following Wheat Ridge’s growth. The Denver Post covered the building boom in March and did another story examining redevelopment efforts in April. The Denver Business Journal also wrote about the Sprouts development and the recent bill signing.

While the city’s economic development efforts are in the spotlight, officials also continue to work hard to build community among residents through unique gatherings and events. On June 22nd, Wheat Ridge and the Ridge at 38 hosted its first Criterium – a Bronze level Rocky Mountain Road Cup race. In addition to high-speed bicycle racing, the Criterium also featured food trucks, a craft beer garden, kids activities and live bluegrass music.

Congratulations to Cellar Wine Bar, which just celebrated its first anniversary. To mark the occasion, we helped the LoHi lounge throw a festive summer party that also served as a fundraiser for the Urban Green Development Sustainable Scholarship Foundation. The foundation is raising money to fund one full-ride scholarship for a North High School student interested in pursuing a career in green and renewable industries.

Cellar Wine Bar owners Brian Delgado and Sandra Lopez donated $1 from every glass of wine sold during the party to the foundation. The cause is especially close the couple’s heart, since they met and fell in love as students at North High. The pair, who married in August 2005, chose to open their business in Highland because of their connection to the neighborhood. As successful entrepreneurs, they serve as role models for current North High students. The anniversary celebration provided the opportunity for Brian and Sandra (pictured below left) to thank the community for its support, while providing a hand up for future generations. 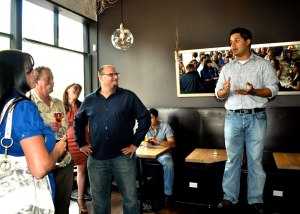 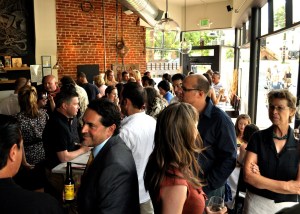 Thanks to all who joined us for the festivities. If you haven’t already, please check out Cellar Wine Bar, located at the corner of 15th and Umatilla. The bar offers 35 different types of wines by the glass as well as sake, beer, cocktails and Spanish-influenced appetizers, including beef and potato empanadas. A patio is the works, which should provide the perfect spot to while away the remaining summer days.